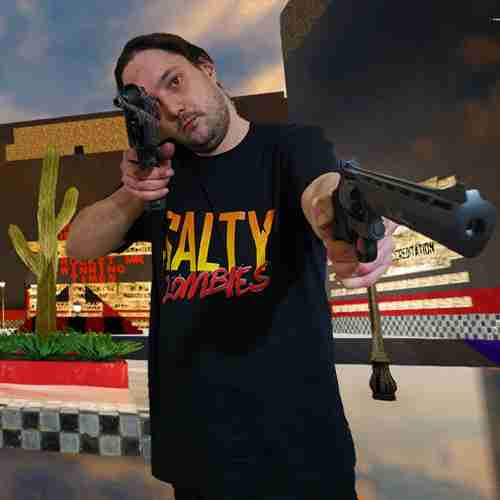 Robmac33 has been tinkering with tech since the age of 7. Starting with the age of acorn computers and playing games since six years old starting with the Nintendo Entertainment System. Steadily progressing through the years with Megadrive (Genesis), PlayStation 1, 2 & 3, then the XBOX ONE. Having a potato build when younger made him build bigger, better PC’s to play games.

His life changed when a friend introduced him to 7 Days To Die on Xbox. He played a very long time with PurpleJord and his other friends. After realising the extreme glitchy nature of the game on the console, he and his friends put the game down on Xbox. When alpha 17 was released on PC, they picked up once more and had many more hours of fun killing zombies and looting. This is where the idea of racing vehicles in 7D2D came from, only minibikes at the time mind.

It got tedious after spending so much time building a racetrack through Skyscrapers and many other POI’s capturing and rebuilding the hospital POI into a home base for the team. He and his friends played the game on and off for a few years until Purplejord tried again during alpha 18.4 and discovered Salty Zombies Dedicated Servers. “Come back, he said, it will be fun, he said”

Namsaknoi always wanted to expand Salty Zombies beyond the borders of the USA. As he is originally from the UK, and they were a few UK players on their US servers. So, he decided to open up a new PVE server located in London. He needed a couple of Moderators to look after the UK server, and who better to recruit than RobMac and his real-life buddy Purple Jord.

Update: Robmac was removed as a moderator only months after his promotion. He was a moderator who was giving Admin powers to fly around and take footage for the SZ Youtube channel. After Namsaknoi caught him abusing these admin powers, he was given a second chance. However, he was caught only a few days later abusing them more unfavourably than the first time. Despite this, he still plays on the UK server and is very helpful and friendly. We are all human with strengths and weaknesses. There are no hard feelings between Rob and the admins, and he is still a popular member of the Salty Zombies community.