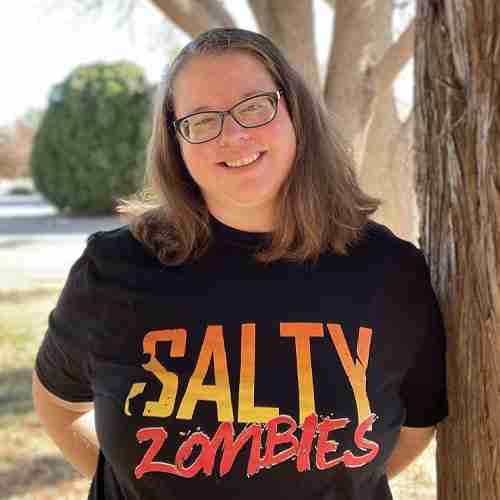 Orion has been a lover of computers, video games and the internet since dial-up was cool and had a timer on the number of minutes you could use each month! Games she enjoys are 7 Days to Die, Conan Exiles, Final Fantasy 14, God of War (yes, all of them) and many more. When she’s not online or sitting at a console, she’s off driving a school bus and being a proud mom of two boys, six cats, two dogs and a fish.

Often described as easygoing, she has a wild (usually adult) comical streak, which, combined with a dry sense of humour, often leads to chaos and confusion for those who don’t know her. She usually says what’s on her mind, failing miserably with sugar coating things, yet combined with all her other fine qualities, it allows her to be an adventurous, honest, and loyal friend. Her favourite holidays are Halloween, Thanksgiving and Christmas.

Her passions are cooking and baking, talking about food and recipes and sharing good times and stories while letting her company indulge in her cuisine. Her interests and pastimes are reading books, playing games (card games, computer, console, board, etc.), sewing, illustrating children’s books, and much more. She has rather eclectic tastes in most things and is willing to try almost anything once!

Her favourite movie genre is horror, with favourites such as Nightmare on Elm Street, the Alien series, the Predator series (mainly the first two), Silence of the Lambs, and Candyman (1992). Her other favourites fall into different genres, including The Lord of the Rings Trilogy, Gladiator, I Dreamed of Africa, Starman, and The Father of the Bride movies. So, if you’re ever looking to talk about food, movies, games, or books, or are looking for someone to hit up in the gaming world and maybe team up to save some virtual worlds (or at least survive the end of one!), Orion welcomes you to reach out!