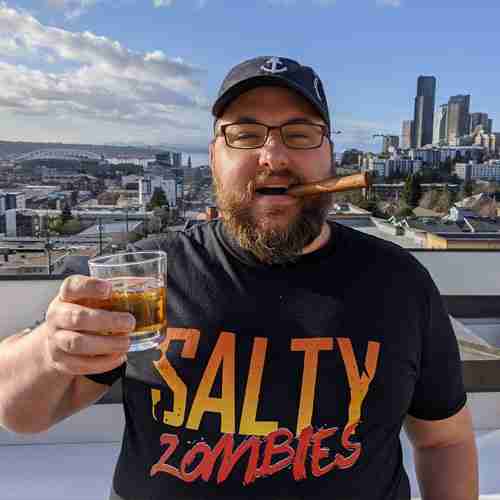 Motornerve lives in Seattle with his wife and his cat named Turd. He works at Amazon as a Business Intelligence Engineer, and really enjoys the culture there. When not working or gaming Motornerve is a huge foodie, always down to try new cuisine whether it’s a hole in the wall or a fancy restaurant atop the Space Needle. Motornerve loves to laugh, and can be found in the audience of Improv Comedy shows all around Seattle; sometimes he even performs! When Motor really feels that wanderlust, he will take a road trip with his wife, often heading to places in the PNW, popping down to Portland, or California for a longer stay, as he has friends and family up and down the West Coast.

Motornerve started gaming with one of the original defining FPS titles; Wolfenstein 3D! Since then, he has always had a passion for FPS games, the Doom series, Quake series, Unreal Tournament series, and Half-Life Series. He has created total conversion mods for both Quake and Doom and has a passion for both coding and level design. He has been working on a space-based FPS for 5 years in the Unreal Engine and loves to talk game design. Now he is tinkering with the Prefab editor for 7 Days 2 Die, and someday you might even see some of his work on the Salty Zombies servers!

Not content to just game in the digital world, Motornerve is truly an all-around Geek. He has a large collection of board games, curated by his lovely wife, and also enjoys tabletop and card games as well, such as Munchkin, DnD, Starfinder, and Magic the Gathering. Motornerve is also an avid reader and loves old school paperback SciFi, as well as modern versions. His favourite book in the whole world is Snowcrash by Neal Stephenson.

Motornerve brings previous mod experience to the team, having worked as a game moderator for Roblox for over three years. His combination of patience and curiosity aid him in his interactions with all sorts of players and situations. As a mod, he values honesty above all else, and he believes in making the game as enjoyable as possible while maintaining fairness whenever he can. He enjoys players who share their builds and ideas and has learned so much from the Salty Zombies community.

Motornerve discovered 7D2D on a steam sale in fall of 2020, and as of the beginning of 2021, he has logged over a thousand hours already! You can often find him on PVE PRO Server mining, or making underground bunkers, as he is very much a Tunnel Snake.