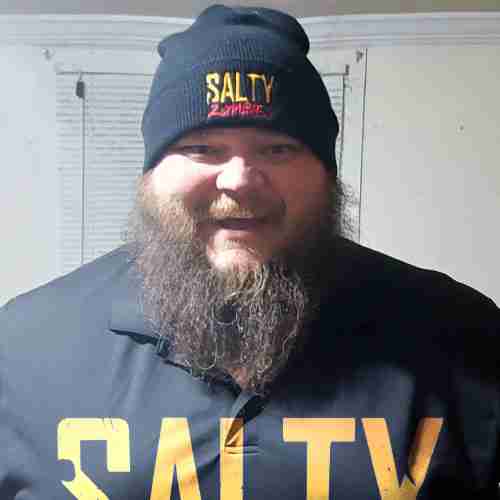 In the not too distant past, there were rumblings of a stranger coming forth out of the hills from the eastern mountains of North America. Arising from the mist of the mountains came a warrior like no other before. A warrior with the stature and nature of the mighty bear. They say he was the offspring of a mountain miner and an Eastern black bear. The nights do get lonely, isolated in the rocky slopes of the Blue Ridge.

By day (IRL), he is a husband, friend and tinkerer. But, like his werewolf cousins by the beam of the moon, his bear mentality takes over, and you will find him in the world of Salty Zombies lending a helping hand to all who call the server home. He was a wanderer once himself until he found the servers he now calls home. He is kind and fair, but like most wild animals, do not test his huggable, lovable nature, for he too, when tested, can strike with beastly fury. His hopes and dreams as a moderator for his new sleuth are to protect and promote that which he holds most dear.

That is the myth anyway. In the real world, I have held many jobs. I have been both employee and employer. I know life can get real sometimes and that we all need an escape. To find the place where we can be ourselves and just let loose. I found that when I came to the Salty Zombies servers. I had primarily played FPS and Racing games my entire life, but a friend encouraged me to try 7 Days To Die, which is when the addiction began. I found a home away from home. The people I have had the honour to play with and the community I am now able to serve have helped me in more ways than I could ever say in just these few words. I hope that I can give back a fraction of what I have received. I am here to help in any way I can. If you see me, be sure to give me a wave and say hello.